Remember the feel of old cloth-bound hardcover books? In this age of Kindles and e-books, Penguin has released a series that allows children to experience the same sensory delight of reading as their grandparents. Suited to middle grade and YA readers, the Penguin Australian Children’s Classic Series brings classic Australian stories back to life. With vintage-look covers, they’re a satisfying blast from the past.

The back cover explains the series’ philosophy:
‘Every so often there comes a story so brilliant and lively and moving that it cannot be left in the past. Rediscover the magic of our country’s most memorable children’s books in this collection of stories too precious to leave behind.’ 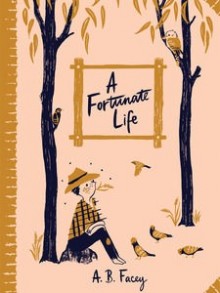 The series includes A Fortunate Life by A.B. Facey. It was published in 1981, when the author was 87 years old. According to his grandson, Albert Facey sent the manuscript to the Fremantle Arts Centre Press in Western Australia, asking them to print a few copies for family use. The publishers, recognising it’s potential, released the book into the retail market.

An autobiography, the book is written in a charming period style. There is a beautiful sense of stillness when he describes his childhood in the bush. We learn about his experiences as a soldier in Gallipoli during World War I, the loss of his farm during the Great Depression, and the loss of his son who fought in World War II. And yet, despite his hardships, he titled his book after what he believed he had: a fortunate life.

The book has since been turned into plays and a television series. This classic story will be enjoyed by children, their parents and grandparents alike! More information can be found at the publisher’s website by clicking here.

I wrote this book review for Creative Kids Tales and they kindly allowed me to reproduce it on my blog.

4 thoughts on “Book review: A Fortunate Life by A.B. Facey”