Hopeless Heroes is a fun-filled adventure series based on Greek mythology. I’m so excited to be able to combine my life-long love of mythology – thanks to my Greek parents! – with engaging characters and hilarious situations. Readers aged 7+ will love the thrills and giggles 🙂 Published by Sweet Cherry UK. Free audio book with each copy!

When Tim Baker breaks his mum’s favourite vase, it’s the least of his problems. The Greek hero he’s released is in danger of doing far worse. To the flowers, the rug – oh, no! Not the kitchen! Hercules is only trying to help, but he’s just hopeless! It’s time to send this dim demigod home – before Tim becomes ancient history. 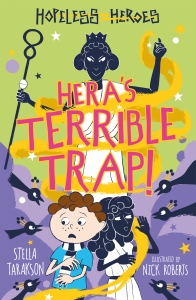 Tim Baker thinks his adventures are over, until he hitches a ride to Ancient Greece on a stolen vase. Soon Tim finds himself trapped with an army of angry peacocks, and a hero who can’t stop admiring himself. Put down that mirror, Theseus! Thank the gods his new friend Zoe is there to help. Just don’t tell her dad Hercules … 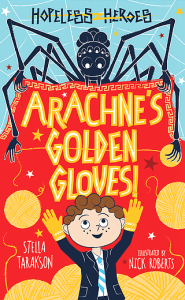 How do you bring a statue to life? Tim and Zoe think they know. If only Jason would help and someone didn’t keep looking at them like flies in a web. Juicy, wriggly, yummy– Enough, Arachne! Oh well, at least the time-travelling vase is in good hands. Well, god hands. The god of thieves and liars’ hands. Uh oh … 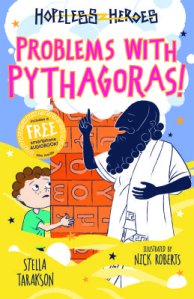 Tim Baker’s got problems: he’s failing maths, banished from Ancient Greece, and confused about what to call Mum’s new boyfriend. What makes a good father anyway? Is it strength, courage and– Strength! –like Hercules believes? Is it attractiveness? Wisdom? Intelligence? Does it have anything to do with beans? Let the Labours of Larry/Mr Green begin! 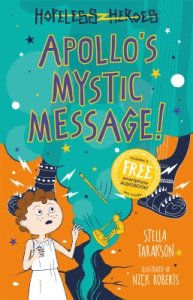 Why is Tim’s picture on an ancient oil flask at the British Museum? Is Hera planning to trap him with it? How? When? Tim needs a god who can see the future … I said A GOD WHO CA – And I said no autographs! Only one thing’s certain: with puking punks, pomegranate grenades and possible butterfly tornadoes, it’s about to get chaotic.